“The Use and Abuse of Cybernetic Concepts in Economics”

David Dewhurst Economics is replete with systems models. Umpleby (2011) identified it as ideal territory for Second Order Cybernetics and Soros’ concept “Reflexicity” previously expressed the same notions, profitably. Hayek promoted the market as the perfect distributed intelligence network and was versed in the potential of neural nets. Mainstream economics has promoted stochastic stabilisation models while Marx posited an inevitable collapse. Complexity and chaos models are easy to build but of little demonstrable use as yet, at least at the macroeconomic level. The modelling of Minsky and Keen has gained credibility and popularity, but modelling itself is prone to systematic weaknesses. The implicit assumptions of economists and the zeitgeist do not usefully simplify these issues. The territory explored in this presentation will be moderated by (damped) audience feedback.

Martin Ciupa This presentation describes closed-loop machine learning applied to neurological disorder diagnosis, prognosis, and therapy. The platform described as a working example is MindMaze’s MindMotion product family. MindMotion’s first application is in stroke therapy. If a stroke victim develops upper arm impairments the computer provides a gamified VR motion-based experience. The patient’s actual kinematic movements are detected (by Machine Learning), and if anomalies are present, recommendations are made to exercise normative motions (e.g., a patient may compensate upper arm movement impairment by twisting the torso). The case is made that the methodology allows for a new paradigm of healthcare, that we refer to as Healthcare 5.0.

Peter Cochrane In an increasingly connected and complex world, solutions to problems are no longer simple. Old techniques and thinking are being pushed aside as non-linearity and emergent behaviour become dominant. So, it is no surprise to see cyber-security on the “back foot” and struggling to cope with agile enemies that are faster to innovate. “We have to get ahead of the game by embracing a multiplicity of new tools and techniques”. “In an ideal world: responses to Cyber and Terror would be automated and immediate”. National Security Threats now embrace: People; Companies; Governments; Devices; Networks; Services; Vehicles; Properties; LAND; SEA; AIR; SPACE; CYBER and INFORMATION. So we have to think and operate simultaneously across all these domains and behave more like our enemies.

“Imparity, Service-Dominant Logic, and the Architecture of Enterprise”

Angus Jenkinson Imparity Is a concept within Ternary Theory (Stewart) that proposes the necessity for a third domain in the organization of (at least) a large variety of systems. These would include the socio-economic systems of civilisation. Service-dominant-logic (SDL) is a paradigm-shifting marketing theory (Lusch and Varga) close to the presenter’s position. It re-architects the nature and relationship of value or service in the (cybernetic) business process. It offers a framework for the considered application of ternary theory. The implications fold back into the conceptual structuring of an enterprise as a recursive dynamic of value-creation. Drawing also on theories of organisational identity and botanical morphology, and including a brief critique of marketing, the presentation hopes to suggest new avenues for cybernetic and practical research.

“A Cybernetic Approach to Introducing Robotics”

Richard Mitchell. Begin Robotics is a successful open online course on FutureLearn, which uses cybernetics to introduce robotics, control, haptics, artificial intelligence and artificial life (including Lovelock’s Daisyworld). Whilst aimed at Key Stage 3 pupils as a recruitment tool, it also features in the first year of the undergraduate degree. The course features various robots, including a specially designed robot called ERIC which appears in some videos, and interactive web pages which are used to illustrate key concepts and in exercises where users work out the velocities of ERIC so that it can perform suitable actions. This talk will give an overview of the course, the cybernetic approach, demonstrate some of the web pages which are used, and feature the “robots behaving badly” out take video.

“Anticipating new waves of disruption in the field of Artificial Intelligence”

This presentation will defend the view that what’s known as AGI, Artificial General Intelligence, might be developed by mid century, and possibly as early as within the next decade. The presentation will include some history, an analysis of how disruption occurs (drawing on the speaker’s enterprise professional experience as well as his studies as a futurist), reasons why the pace of development of AI is likely to increase, answers to various commonly expressed criticisms, a review of some potential future scenarios, and some discussion about steps that might be taken in view of this analysis. As it happens, Norbert Wiener long ago anticipated some more recent thought experiments about over-eager paperclip maximisers. But as AGI approaches, paperclip maximisers will be the least of the challenges facing society.

Although Marx’s saw humans as intrinsically “natural”, his theory of estrangement from the self (1844) can be interpreted either allopoietically, or autopoietically. For 10K years, agriculture and technology have enabled us to scale-up our social systems at levels increasingly beyond our comfort zones, cognitively speaking. We did so by exchanging the situated experience of being “responsible” with the detached and summative concept of “accountability”. Since then, successive developments (clock-time, unit-based money, geometry, writing, Taylorism, automation, AI, etc.) added layers of alienation, that estranged us further from ourselves in our “natural” ecological context. One way to make governance and education more convivial, like “living systems” (i.e. “sympoietic”) is to develop Metadesign tools and grammatical frameworks that are more relational. 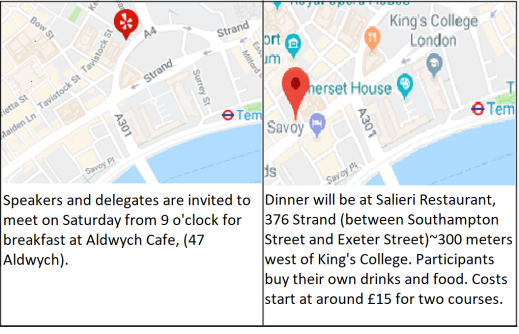