This special issue was inspired by papers presented during the inaugural Social Innovation and Complexity Stream at the 9th International Social Innovation Research Conference (ISIRC) in 2017. The introduction of a complexity stream at the 9th ISIRC builds upon two previous International Conferences on Social Entrepreneurship, Systems Thinking and Complexity that were held at Adelphi University, Garden City, New York in 2008 and 2010.

The theme of the 9th ISIRC was ‘Beyond Boundaries? Organizations, Systems and Social Innovation’. In line with the conference theme, the call for papers for the Social Innovation and Complexity Stream was particularly interested in receiving abstracts that explored the role of complexity theory for social innovation beyond boundaries. 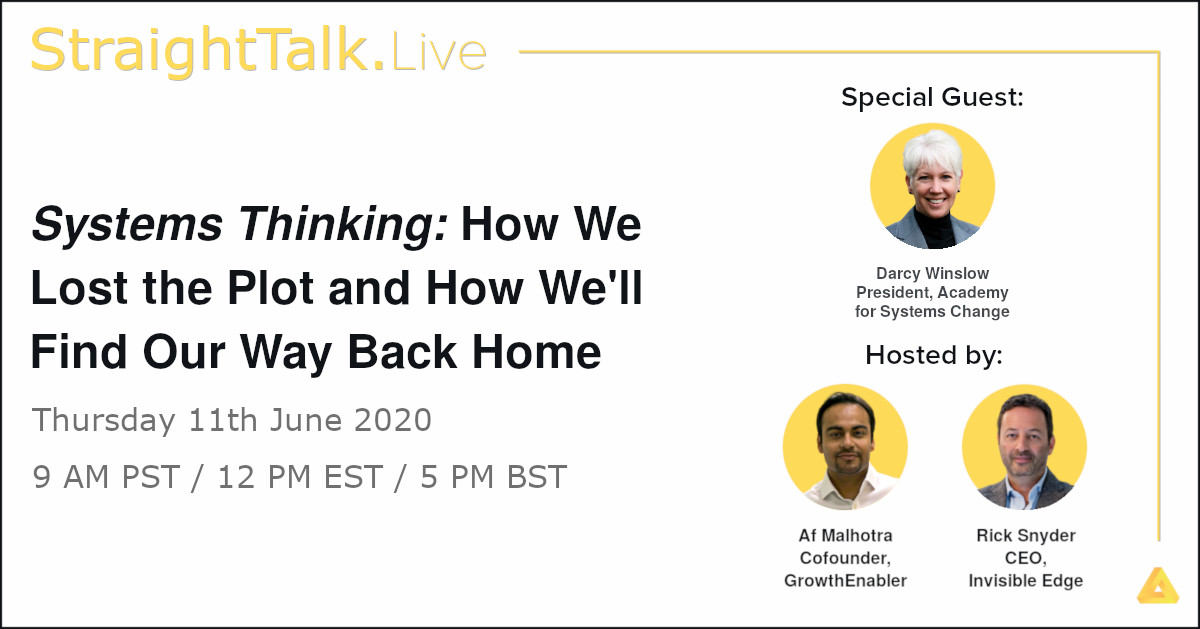 Systems Thinking: How We Lost the Plot and How We’ll Find Our Way Home

Our current breakdown of leadership, infrastructure, networks, and cooperation have been tested and exposed during this pandemic. And what’s glaringly obvious is our fundamental disconnect from ourselves, each other and the planet.

Listen in as Darcy dives into the game-changing approach of systems thinking to tackle our greatest challenges ahead.

Copernican Revolution – Systems Thinking: In today’s post, I am looking at “Copernican Revolution”, a phrase used by the great German philosopher, Immanuel Kant. Immanuel Kant is one of the greatest names in philosophy. I am an Engineer by profession, and I started learning philosophy after I left school. As an Engineer, I am trained to think about causality in nature – if I do this, then that happens. This is often viewed as the mechanistic view of nature and it is reliant on empiricism. Empiricism is the idea that knowledge comes from experience. In contrast, at the other end of knowledge spectrum lies rationalism. Rationalism is the idea that knowledge comes from reason (internal). An empiricist can quickly fall into the trap of induction, where you believe that there is uniformity in nature. For example, if I clapped my hand twenty times, and the light flickered each time, I can then (falsely) conclude that the next time I clap my hand the light will flicker. My mind created a causal connection to my hand clapping and the light flickering. David Hume, another great philosopher, challenged this and identified this approach as the problem of induction. He suggested that we, humans, are creatures of habit that we assign causality to things based on repeat experience. His view was that causality is assigned by us simply by habit. His famous example of challenging whether the sun will rise tomorrow exemplifies this:

On the face of it, a Dan Brown-like mystery…

System Dynamics Hackers Wanted. Do you have what it takes?

System Dynamics Hackers Wanted. Do you have what it takes?

While people like looking at network maps, do they have an appreciation for the meaning, based on the underlying mathematics?

The current state of interpreting network maps is basically an accepted but criticized practice. Some do it well, some do it wrong, but no one can actually provide a precise reason why it works (or seems to).

This refers back to a 2005 paper Divided They Blog , a paper by Lada Adamic and Nathalie Glance (search on Google Scholar): 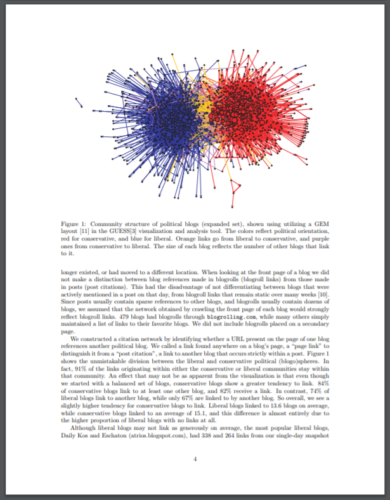 The paper was published in 2005 and has been hugely cited (2551 times in 2019 according to Google Scholar). I have two stories about this image, a tale and a horror story, which together form a bigger story.

Originally published on May 13, 2013 for Ethnography Matters, I’m republishing the post for the launch of the new Ethnography Matters Medium channel. I’ve updated the article with a case study from my time at Nokia where I witnessed their over-dependence on quantitative data. I’m continuously blown away by how much my original post in 2013 sparked a discussion about the integration of Thick Data and Big Data. Since then, I have talked about this topic with EPIC conference, Republica and Strata. I also gave a TED talk targeted for business leaders. Just last year, Word Spy created an entry of Thick Data, referencing my original post as the resurgence of the term. My goal is to create more opportunities to feature people who are doing this kind of integrative work inside organizations. Please reach out if this kind of work is up your alley. You can start by joining a community of people who are at the forefront of this work at Ethnography Hangout Slack’s #datatalk channel. Thank you to IDEO’s Elyssa He for translating this article into Chinese, 大数据离不开 “厚数据”, published on 36kr and Paz Bernaldo for translating this into Spanish.

This workshop presents the open systems model, its core architecture and principles, and how it’s being used in the most innovative applications of innovative organization design today. In addition, the course has a focus on the role of the organization practitioner in the facilitation of design choices and operating model. What we offer is an “applied open-system thinking” framework. It is therefore both historical / conceptual and practical applied to our current world.

Who should join us

The evolution of Open Systems Theory and Practice: from SocioTechnical System, to Agile Development, to Digital Platform Design.

What is STS and how is it “reframed” in the 21st century. The roots and history with lots of how does it translate/apply to today. The organization as an open system: theory and principles and finding the right balance between efficiency and adaption – ambidexterity.

In this session we will set the foundation for all four modules and discuss pre and post work for each episode.

To show the gradual shift from hierarchy to networks, and how networks are designed for performance. One of the questions for this session is: what replaces hierarchy? Overview of model and functionality of AWS (Adaptive Work Systems) and Agile (Balanced Optimization Model).

Episode 2 shares case examples (Global Pandemic, Migration from the Middle East and Africa to Europe, Migration from Central America to the US, European Electrical Grid) and looks at applications of STS thinking to implications for current and near future reality.

To define digital socio-technical design: structure, processes, how it works. This is about the future and possibilities, what could a STS applied world of the future look like. Building on lessons from the 1st two modules. The case here is the pandemic and its implications and outcomes, near term and 20 years out.

For participants to understand that design is driven from strategic and customer data, not a faddish model. “An aha moment that creates a new story, a new pattern of connections in your brain. Once you have had an insight, you cannot go back to the old way of thinking.”

This session is the “Insight – Action” session, so to speak. During this module we really focus on how to bring STS to today’s current realities and apply.

A way forward, expressed with clarity, preferably as a story. This “capstone session” focuses on applying STS to your situations/clients; Integrating STS with other professional frameworks (it is not an either-or, but a both-and); and, STS as applied research.

Innovative thinking about a global world

ABM models for the COVID-19 pandemic

A Definition of Systems Thinking: A Systems Approach – ScienceDirect

A Definition of Systems Thinking: A Systems Approach

A Definition of Systems Thinking: A Systems Approach – ScienceDirect

Council Post: The Role Of Systems Thinking In Organizational Change And Development

The Role Of Systems Thinking In Organizational Change And Development

What the Pandemic Is Showing Us About Systems Thinking

From the Voices on Project Management Blog

1. To have a successful theory, you need a unified theory of your system.

2. Looking at the world as a system can help point toward a quicker recovery.

“We’ve got to be as clear-headed about human beings as possible, because we are still each other’s only hope.”

NOTE: This is the first installment in a multi-part series covering Mead and Baldwin’s historic conversation. Part 2 focuses on identity, race, and the immigrant experience; part 3 on changing one’s destiny; part 4 on reimagining democracy for a post-consumerist culture.

On the evening of August 25, 1970, Margaret Mead (December 16, 1901–November 15, 1978) and James Baldwin (August 2, 1924–December 1, 1987) sat together on a stage in New York City for a remarkable public conversation about such enduring concerns as identity, power and privilege, race and gender, beauty, religion, justice, and the relationship between the intellect and the imagination. By that point, Baldwin, forty-six and living in Paris, was arguably the world’s most famous living poet, and an enormously influential voice in the civil rights dialogue; Mead, who was about to turn seventy, had become the world’s first celebrity academic — a visionary anthropologist with groundbreaking field experience under her belt, who lectured at some of the best cultural institutions and had a popular advice column in Redbook magazine.

They talked for seven and a half hours of brilliance and bravery over the course of the weekend, bringing to the dialogue the perfect balance of similarity and difference to make it immensely simulating and deeply respectful. On the one hand, as a white woman and black man in the first half of the twentieth century, they had come of age through experiences worlds apart. On the other, they had worlds in common as intellectual titans, avid antidotes to the era’s cultural stereotypes, queer people half a century before marriage equality, and unflinching celebrators of the human spirit.

Besides being a remarkable and prescient piece of the cultural record, their conversation, the transcript of which was eventually published as A Rap on Race (public library), is also a bittersweet testament to one of the recurring themes in their dialogue — our tendency to sideline the past as impertinent to the present, only to rediscover how central it is in understanding the driving forces of our world and harnessing them toward a better future. This forgotten treasure, which I dusted off shortly after Ferguson and the Eric Garner tragedy, instantly stopped my breath with its extraordinary timeliness — the ideas with which these two remarkable minds tussled in 1970 had emerged, unsolved and unresolved, to haunt and taunt us four decades later with urgency that can no longer be evaded or denied.

Although some of what is said is so succinctly brilliant that it encapsulates the essence of the issue — at one point, Baldwin remarks: “We’ve got to be as clear-headed about human beings as possible, because we are still each other’s only hope.” — this is nonetheless a conversation so complex, so dimensional, so wide-ranging, that to synthesize it in a single article or highlight a single dominant theme would be to instantly flatten it and strip it of power. Instead, I am going to do something I’ve never done in nearly a decade of Brain Pickings — explore this immensely valuable cultural artifact in a multi-part series examining a specific viewpoint from this zoetrope of genius in each installment, beginning with Mead and Baldwin’s tapestry of perspectives on forgiveness, the difference between guilt and responsibility, and the role of the past in understanding the present and building a more dignified future.

A Rap on Race: Margaret Mead and James Baldwin’s Rare Conversation on Forgiveness and the Difference Between Guilt and Responsibility – Brain Pickings

Developing a systems perspective for the evaluation of local public health interventions: theory, methods and practice