Be suspicious of science(s) based on a presumption of equilibrium.  This dates back to 1910, with Henry Adams on the second law of thermodynamics.

If the silent, half-conscious, intuitive faith of society could be fixed, it might possibly be found always tending towards a belief in future equilibrium of some sort, that should end in becoming stable; an idea which belongs to mechanics, and was probably the first idea that nature taught to a stone or to an apple; to a lemur or an ape; before teaching it to Newton. [pp. 185-186]

Unfortunately for society, the physicists again abruptly interfere, like Sancho Panza’s doctor, by earnest protests that, if one physical law exists more absolute than another, it is the law that stable equilibrium is death.  [editorial emphasis added]

A society in stable equilibrium is — by definition, — one that has history, and wants not historians.  [p. 186]

Thomson and Clausius startled the world by announcing this principle in 1852; but the ants and bees had announced it some millions of years before, as a law of organisms, and it may have been established early, in more convincing form, by some of the caterpillars.  [pp. 186-187]

According to the recent doctrine of Will or Intuition, this conclusion was the first logical and ultimate result reached in the evolution of organic life; but the professor of history who shall accept the hymenoptera and lepidoptera as teachers in the place of Kelvin and Clausius, will probably find himself in the same dilemma as before.  [p. 187]

If he aims at carrying his audience with him, he will have to adopt the current view of a society rising to an infinitely high potential of energy, and there remaining in equilibrium, the only view which will ensure him the sympathy of men, as well as, — probably, — of caterpillars; but if wants to conciliate science, he will have to deride the idea of a stable equilibrium of high potential, and insist that no stable social equilibrium can be reached except by degrading social energies to a level where they can fall no further and do no more useful work.  [pp. 188-189]

Perhaps this formula, too, may please many students, whose potential of vital energy, — or, in simpler words, whose love of work, — is less archaic than that of the ants and bees; but as a matter of practical teaching, — as a mere choice between technical formulas, — the two methods result in the same dilemma for the old-fashioned evolutionist who clings to his ideals of indefinite progress.

Between the two equilibriums, each mechanical and each insisting that history is at an end, lost forever in the ocean of statistics, the classical University teacher of history, with his intuitions of freewill and art, can exist only as a sporadic survival to illustrate for his colleagues the workings of their second law of thermodynamics [p. 188]. 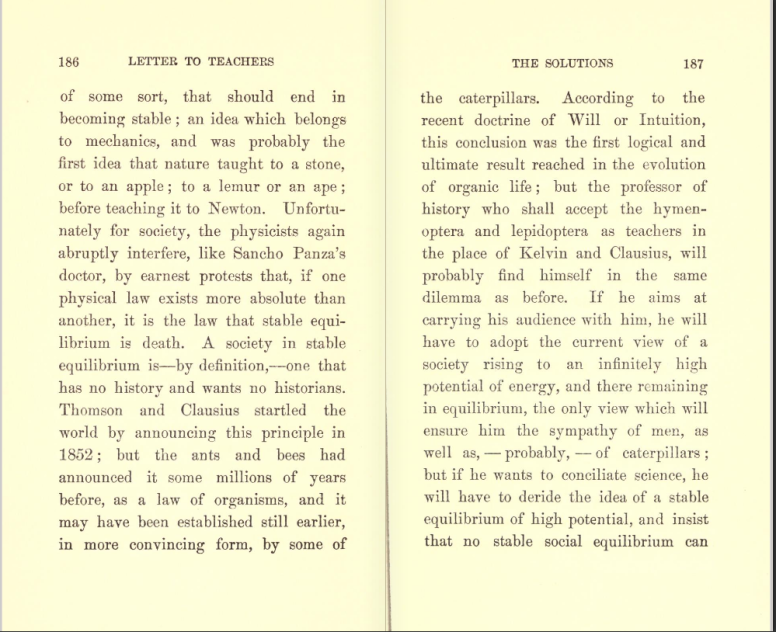 There’s a 1992 appreciation of Henry Adams by Keith Burich.

Ever since Henry Adams penned the phrase “stable equilibrium is death” in his Letter to American Teachers of History (1910), historians have quite naturally assumed that he was referring to the awful predictions of the Second Law of Thermodynamics, which requires the irreversible dissipation of human and natural energies point of a universal, deadening stasis. […] What has been lost on Adams’s biographers, however, is the fact that his interest in and understanding of modern science was far in advance of many of his contemporaries’, including many scientists, and that his dabblings in geology and evolution in the 1860s reflected an early uneasiness with the prevvailing assumptions that the forces governing man and nature are rational, predictable, and purposeful. [p. 631]

Lyell’s three-volume Principles of Geology, published in 1830, became the foundation for modern geology. It was more than a textbook on geology, however; it was a defense of a theory of the earth’s organic and inorganic development, a theory that came to be known as uniformitarianism. Lyell hoped to establish geology as a legitimate science by insisting that the theories had to be based on empirical observation and verification rather than metaphysical speculation and that the organic and inorganic history of the earth could be explained by forces currently at work in nature. The competing theory, catastrophism, is most often associated with biblical literalism. Since according to the Word the earth was created in 4004 B.C., its geological contours had to have been the result of divinely directed interventions, catastrophes like floods, because the earth’s relative youth did not allow for more gradua processes. [pp. 632-633]

As Stephen Jay Gould has recently shown, Lyell and his predecessor, the eighteenth-century English geologist James Hutton, were committed to a cyclical conception of time, or what Gould terms “time’s stately cycle.” Under the Newtonian dispensation Hutton and Lyell were trying to apply to geology, like causes have like effects; changes are predictable. If the catastrophists were to be believed, however, time would not form an endless series of identical cycles, but a linear progression pointing in some unknowable direction. According to Gould, Hutton and Lyell were unwilling to embrace the possibility that the changes that effected organic and inorganic history might be rapid and discontinuous. Randomness could not order the universe, or so they thought, and thus time’s stately cycle must lay at its heart.

Adams let his readers know from the outset that Lyell had hitched his horse to uniformitarianism and was unwilling to entertain alternative explanations for geological phenoemena, a shortcoming Adams would later exploit in the review He warned his audience not to expect more than a textbook on uniformitarian principles from Lyell. [p. 634]

[…]
By the 1860s Adams was already chafing at attempts to reduce man and nature to mechanical, deterministic formulas and to impose “one Form, Law, Order or Sequence” on history. It was motion and change, not promises of perfection, that attracted him. Nevertheless, he had no alternative but to accept the prevailing orthodoxies of the day. [p. 644]

Adams’s suspicions about the inadequacies of uniformitarianism have recently and indirectly been given credence by Gould and his colleague Niles Eldredge, who have questioned the assumption that evolution proceeds inexorably from lower and simpler organisms to higher and more complex species. Gould and Eldredge have suggested instead that species remain remarkably stable over time and that new species appear abruptly and rapidly, not gradually and progressively out of existing species. Adaptation and natural selection account for minor changes but only after the equilibria in which species normally persist are “puncutated” by the sudden appearance of new species. Furthermore, Gould has shown that evolution has been by catastrophes, like the one that caused the demise of the dinosaurs and more serious ones that extinguished up to percent of all species nearly six hundred million. Gould has concluded that such catastrophes have been more instrumental in shaping the course of evolution than competition and natural selection. If so, then no necessary direction can be imputed to evolution, and the current state of nature may not be inevitable and predictable.  [p. 645]

Good science (and history) should learn from nature.