I had heard about “Turbulent-Uncertain-Novel-Ambiguous (TUNA)” ‘is the new VUCA’ – turns out this tracks back to Raphael Ramirez!

You Say VUCA, I Say TUNA: How Oxford Helps Leaders Face The Complex And Uncertain Future

Faculty in foresight, leadership and learning

“At Oxford we try really hard to try to get through the futurology that’s out there, and (instead) power people who have resources and agency to do things better,” says Dr Angela Wilkinson, who teaches the program along with Saïd School Professor Rafael Ramirez.

Scenario Planning is a method of direction-finding and strategy formation that defines itself by non-prediction.  Scenarios are integrated narratives of how the future may unfold, with always two or more in a set. This avoids the brittleness of a singularly predicted future—which the unpredictable world will surely make nonsense of.

The OSP accepts about 40 delegates and—fairly unusually for executive education—also hosts two or three organizations as real-world “proto-clients,” providing live client situations for the delegates to work on .

In the next program, April 25-29, 2016, the proto-clients are: a University (not Oxford) trying to manage faculty field research in the new era of geo-political risk; an FMCG ice-cream company concerned millennials aren’t buying its products; and a scholarly professional body struggling with how digitalization is eroding its centralized authority and journal-based business model.

“These live cases give the program a ‘clinical-research feel,’” says Wilkinson. “We used to use some form of a generalized case, like Harvard Business School cases. But that doesn’t prepare the delegates for what they are going to encounter in their organizations.

“Live clients reflect the ambiguity of the scenario planning reality they will find themselves in, how messy and difficult it is.”

The clients present their business situation late on Monday, and are then interviewed over dinner by the assigned delegate teams. Midweek there is a check-in teleconference lasting 1-2 hours during which the teams test their evolving framework. A half-day on Friday is given to client presentation and discussion of the implications.

For executives that don’t have a spare week and approaching £6,000 (about $8,400) to spend at Oxford’s Egrove Park executive education facility in England, co-incidentally Ramirez and Wilkinson have just published a book, Strategic Reframing: The Oxford Scenario Planning Approach (Oxford University Press, 2016)  written to broaden access to the philosophy and methods of the Oxford Scenario Planning Approach (OSPA). 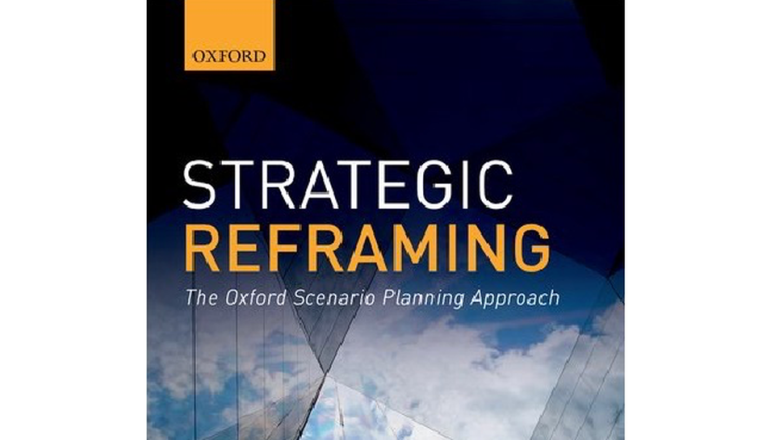 “Reframing” in the title refers to leaders’ mental frames—sometimes called mental models, or paradigms—that scenario planning targets. A key problem, arguably the key problem in successfully managing a TUNA world is “frame rigidity,” when a leader’s mental model is not wide enough or flexible enough to perceive (or to take seriously) all the alternative, plausible outcomes that matter.

Scenario planning invites multiple framings of an uncertain situation, making leaders more aware and conscious of the legacy frame they have unconsciously been using to make sense of the world.

According to Strategic Reframing: “Reframing occurs in the process of scenario planning when alternative scenarios describing future contextual environments are contrasted to reveal, test, and redefine the official future (given frame).

“By rehearsing actions with these alternative frames, new and better options for action can be identified and contribute to a re-perception of the present situation.”

Wilkinson is an alumna of renown planning office at Royal Dutch Shell and currently Head of Strategic Foresight at the OECD in Paris, where she describes her remit as “leading a project to upgrade it (strategic foresight).

“The OECD, like most organizations, is strongly oriented to ‘evidence-based policy.’ If you can’t quantify it, it can’t go in the conversation,” she says.

“ But if you just stick to the numbers you can end up ‘not learning’ because you just stick with the stuff you can measure as opposed to the stuff that’s important —which requires you to exercise judgment.

“Quantitative, evidence-based policy served us well in he last maybe 10 or 20 years before the financial crisis, when everybody thought everything was very steady state.

“You can manage by numbers but you can’t lead by them. Quality of judgment, of intervention, needs a more systemic understanding of why things happen, and are connected to each other.”

“The numbers matter, but so do the narratives,” says Wilkinson.

In the Strategic Reframing forward, Kees van der Heijden, another Shell planning office alumnus who has greatly advanced scenarios thinking, says “a management system driven by macro-predictions and forecasts has proven too narrow to deal with turbulence.

Restoring this balance is what scenario planning offers.

“We ground it in Winnicott’s Transitional Space,” says Wilkinson, referring to the psychologist Donald Winnicott famous for the concepts of a “transitional object” and “transitional space”—being the object or area by which the self navigates and learns its relationship with the outside world.

“We take this into the classroom, and we get them to understand that the scenario planning process is ‘a transitional space.’”

When a firm navigates its relationship with the outside world, particularly an apparently hostile or at least disagreeable TUNA world, the pathologies of the organization emerge. “They fall into fragmentation—lack of a common agenda or, alternatively, complete groupthink and complete blindspots,” says Wilkinson.

The question is how do you create a healthy what van der Heijden calls “strategic conversation” that allows leaders and experts to consider ideas that are not familiar to them, and to disagree with each other safely.

Says Wilkinson: “The scenario process in Shell originated from trying to stop people pushing forward pet projects and enable a contestation of future that allowed better decisions, including investment decisions, to be made in the present.”

While Shell was and remains the poster-boy company for scenario planning, its methodology, or at least what is understood and represented as its methodology by knock-off scenario consultants, has also been responsible the banalities of utopias or dystopias or techno-armageddon future narratives that are unhelpful to the real process of decision-making for leaders facing everyday uncertainty.

“The (bulk of the scenarios) literature talks about methodology and theory as process: There are the steps—‘the 3-step process’ or ‘the 6-step process’ you go through. It is a selling logic! There is so much ‘production’ of scenarios, so little effective use of them,” says Wilkinson.

Raising the quality of scenario planning is very much part of the OSP’s agenda. The program was started in the early 2000s by Ramirez, joined soon after by Wilkinson, and has been continually refined as the field itself has come to understand the many pitfalls that scenario projects have fallen into.

“We looked at lots of training programs on scenarios. You follow these-and-these steps and end up with 2×2 matrix and you think you’ve done well. But 99% of those fail. So we asked ourselves what do they need to know in order not to fail at that point?

“At the OSP you learn from all the mistakes the field has made over the last 60 years.”

As part of this, Wilkinson explains how the OSP executive education week has been redesigned to focus delegates not on method—is there a right or a wrong way to do it—but on “‘where does it fit in with the purpose of the organization, its vision, mission, or strategy?’”

This requires taking OSP student delegates well past creating analytical content for scenarios, towards a deeper understanding of how the scenario process needs to dovetail with organizational purpose and the leadership agenda.

Institutional context is woven into good practice. “Good for us means they are useful and usable, as opposed to analytically credible but nobody has the slightest interest in them,” says Wilkinson.

“When the delegates first come in (to the OSP) the question you have to work really hard at is ‘the forecasting question,’ because they are so tram-lined into forecasting they can’t break out of that mode.”

Over the week delegates learn to “have to have deeper understanding of what the intervention that is being brought to bear by leadership is, and then what does that mean that scenario planning process need to be?

“They are not learning not to produce a set of scenarios, but to design a scenario-based intervention in their organizations,” says Wilkinson.

This is why embedding learning with the real problems of real-world clients is intrinsic to the OSP teaching process . Delegates learn about the political setting as well as the social process of the client, because what works for one won’t necessarily work for the other.

Over the course of the client service process, the student delegate groups go through the full learning-to-build scenarios cycle twice—they get two bites at both scenario-building and client-engagement.

This is to reinforce learning, as one may expect, but an iterative, revisiting, relearning process is what defines the Oxford scenarios method, and what it is fundamentally teaching practitioners to do when making client-worthy scenarios, wherever and whenever they do it.

According to Strategic Reframing: “Scenario planning as we see it in the OSPA is ideally not a linear ‘project’ with a beginning, middle, and end, nor (ideally) a one-off intervention, but is instead an iterative process that enables and sustains organizational learning.” 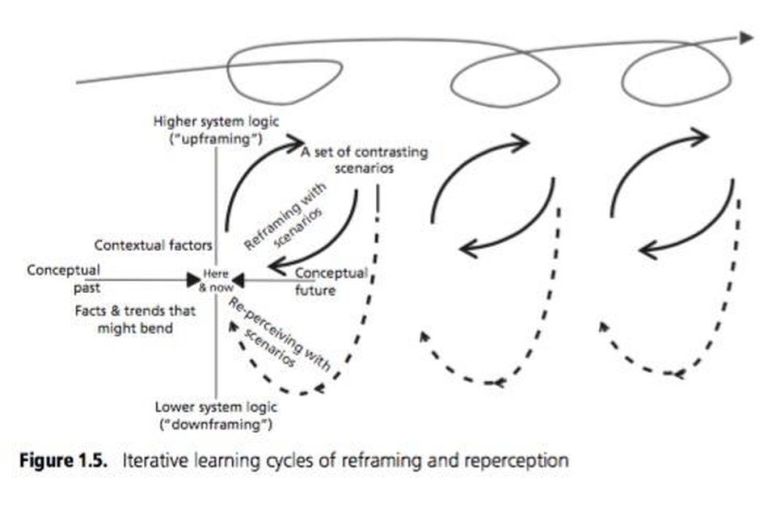 “That iteration of loops, building and using then rebuilding and reusing, is what makes the difference,” says Wilkinson.

To iterate, prototype, fail-fast, and rework, is an approach to that many fields, including strategy and scenario planning, have learned from design thinking.

The iterate-learn-rework model also helps would-be scenario practitioners understand that learning—about their client and its internal and external contexts, and the future it is facing—is at the heart of scenario-based management of a TUNA world .

The preferred term for a scenario practitioner in Strategic Reframing is not “scenario planner” or “scenario facilitator,” but “scenario learner.”